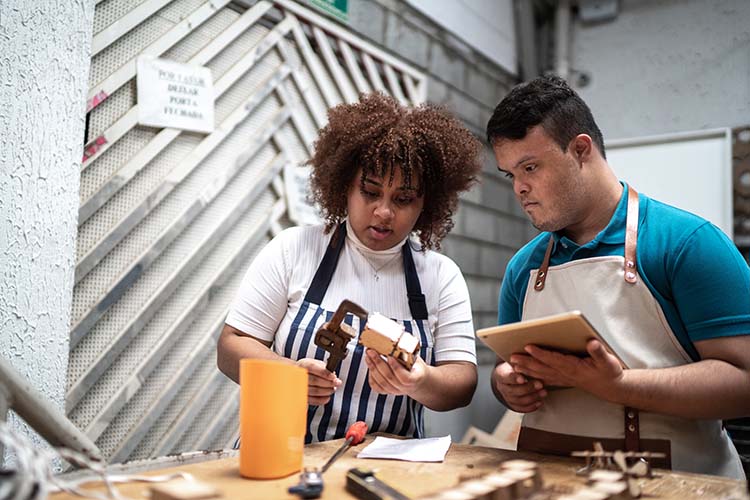 Lockheed Martin: Customizing Accommodations Results in Increased Productivity for All

One August 16, 1912, Glenn L. Martin established the Glenn L. Martin Company in Los Angeles, CA. He started the company after building his first plane in a rented church, where he took a leap of faith on his risky but innovative new aircraft design at the urging of none other than Orville Wright.

Four months later and four hundred miles away, on December 19, 1912, Allan and Malcolm Lockheed founded the Alco Hydro-Aeroplane Company, later renamed the Lockheed Aircraft Company. Talented mechanics, they set up shop out of a garage, constructing seaplanes that would shatter speed and distance records for overwater flights.

Today, the Lockheed Martin Corporation is headquartered in Bethesda, Maryland. It is principally engaged in the research, design, development, manufacture, integration and sustainment of advanced technology systems, products and services. The gift that Martin and the Lockheed brothers shared was a unique ability to look past the obstacles of today to the promise of a brighter tomorrow. And they knew—as Lockheed Martin has known for more than 100 years—that innovation, performance and purpose were the keys to accelerating that tomorrow.

Carey Cox was always determined to work in the Aerospace industry. After he earned his Ph.D. in Mechanical Engineering from Mississippi State in 1992, Carey began work in the research field. He then joined the staff at Louisiana Tech University in Ruston, Louisiana, as a professor in Mechanical Engineering. But he never quite felt fully satisfied on the job. “I loved the teaching part of the job, If it was just that, I would have stayed,” said Carey. “But it’s like working two jobs, with the research and everything that goes into it.” So, when he saw a position available at Lockheed Martin Aeronautics in Fort Worth, Texas, he applied. Carey joined the Aeronautics team in 2005 as a Propulsion and Computation Fluid Dynamics engineer.

In October 2009, Carey was in an automobile accident that left him with very limited use of his limbs. No longer able to stand or walk, Carey knew his return to work at Lockheed's aeronautics facility would be challenging. The Aeronautics Fort Worth campus is spread out over more than 600 acres and has in excess of seven million square feet of building space. Carey’s desk is located in a remote area in the back of a building that is connected to the main plant factory. The building houses hundreds of cubicles in several dozen areas. Carey began working from home in March of 2010 to ease his transition back to work.. Lockheed Martin arranged for an entire workstation to be installed in Carey’s home, because a laptop did not have enough storage space or capacity to perform the complex tasks needed for his job.

In June 2010, Carey was able to begin returning to the aeronautics facility. “The first thing they had to do was find somewhere for me to park,” Carey recalls. Given the size of the buildings and parking lots, most employees park at least 100 yards away from the building entrance, and then have to walk an additional distance to get to their desk. The Aeronautics Work Accommodations Team partnered with the Facilities Department and the Security Department to create a special parking spot for Carey. They also installed automatic doors so he would have easy access to his desk. Carey says he truly appreciates what the company and his coworkers have done to ensure he can continue to contribute and perform the work he loves. “It’s great to work with people that are so helpful,” said Carey. “It really makes me feel good to know that I’m a valuable part of the team, and to see the extra efforts put in for me.” Carey’s coworkers, on their own time, also refinished the floors in Carey’s home so that he could more easily move about there.

Carey represents the Lockheed Martin workforce—employees who are optimizing opportunities and making a difference. Through a number of company-wide initiatives, one of which is providing accommodations like those mentioned above, the corporation works to provide a fully inclusive workplace for all applicants and employees, including people with disabilities, which results in continued value for its customers. It is about creating an environment that welcomes, respects and leverages employees’ individual differences as a competitive strength—an environment where all employees are passionate about their jobs and able to fully contribute.