The Employer Assistance and Resource Network on Disability Inclusion (EARN) is a free resource that helps employers tap the benefits of disability diversity by educating public- and private-sector organizations on ways to build inclusive workplace cultures. 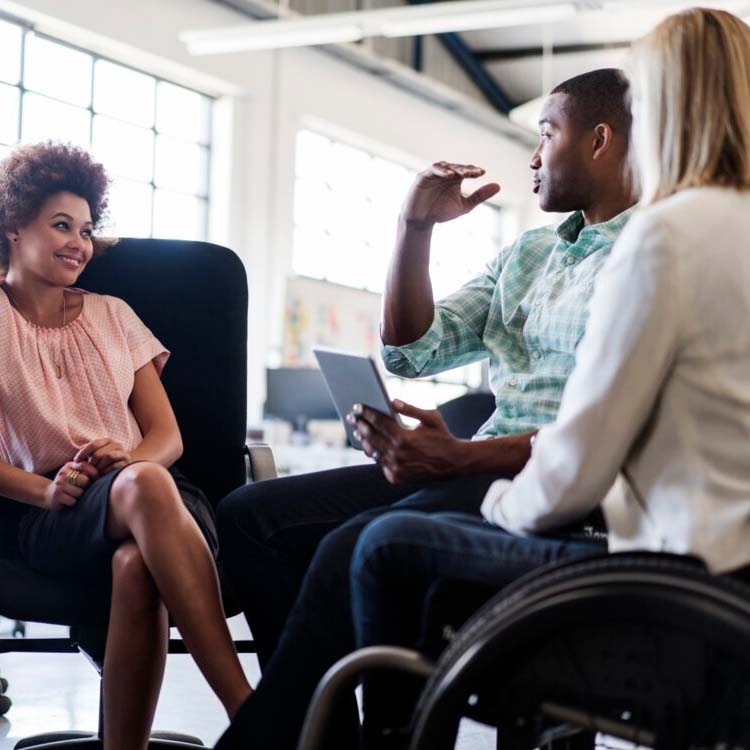 Getting Started / Learning Center / Neurodiversity in the Workplace

Many companies, from large corporations to small businesses, have developed successful neurodiversity hiring initiatives that are helping to improve their bottom lines and increase the employment rates of people with disabilities. Employers often form partnerships with nonprofit organizations; disability-focused groups; and/or state and local agencies to ensure their hiring initiatives are successful (see Ford, Freddie Mac and Willis Towers Watson below as examples). For ideas on local and state organizations to partner with, see EARN’s “Finding Job Candidates with Disabilities” webpage.

Technology firm auticon US (formerly known as MindSpark) leverages the skills of employees on the autism spectrum to enhance its information technology services, including quality assurance and testing; analytics, software development and migration; compliance and reporting; and performance testing. Founded by Gray Benoist, the father of two sons on the autism spectrum, the Los Angeles-based company was founded in 2013 and now has more than 150 employees, nearly all of whom have autism. Among the key strategies it uses to recruit neurodiverse employees is a four-week training schedule to assess suitability for open positions, rather than a traditional application and interview process. Auticon also offers accommodations such as headphones for employees with noise sensitivity, dark rooms for those with light sensitivity and messaging apps for those who prefer to communicate non-verbally.

As part of its focus on inclusion and diversity, Capital One in Richmond, VA set up an internship program aimed at bringing in young people on the autism spectrum to work at the company. The program, called Autism at Work, originated in 2009 as the brainchild of Capital One associates with children on the autism spectrum. In 2015, the program’s first year, four of the seven interns who completed the program went on to work full-time at Capital One.

The DXC Dandelion Program is an initiative to assist people on the autism spectrum to build Information technology skills to develop and advance in careers in the field. The original concept was developed by Michael Fieldhouse, an executive at DXC. Since its inception, the program has established seven teams in four states and territories across Australia. The program’s aim is to offer opportunities for people who are on the autism spectrum and harness their skills that will prepare them for future careers.

EY’s neurodiversity initiative, now known as the Neurodiversity Centers of Excellence (NCoE), began in 2016 as a small pilot in its Philadelphia office. The company’s goal is to leverage the strengths and sensitivities commonly associated with people with neurocognitive disabilities, including technological and analytical skills.

Neurodiverse EY professionals perform a variety of tasks and processes for clients. Employees in the program are often housed within a client’s office alongside colleagues that focus on client relationships and other tasks, while other neurodiverse employees work out of EY’s offices and handle tasks for multiple clients across various areas of the business.

As is the case for most successful neurodiverse hiring initiatives, EY’s program does not require traditional recruitment and onboarding practices. Instead, they employ a project team and a host of external resources to source, select, onboard and support new hires.

Following the success of a pilot program at its Dearborn, MI headquarters in 2016, Ford Motor Company expanded its hiring initiative for people on the autism spectrum later that year. The goal of FordInclusiveWorks is hiring and supporting employees on the autism spectrum. The company began the pilot program by working with its Product Development Vehicle Evaluation and Verification supervisors and Human Resources department to review open jobs. It then partnered with the Autism Alliance of Michigan, which sent staff to Ford to shadow jobs and determine which would be suitable for the particular strengths of employees with autism and to help address any issues that might arise. The company then worked to develop a “playbook” of what they learned from the pilot program to expand Ford’s work-experience programs to accommodate a variety of different types of disabilities.

Freddie Mac partnered with the Autistic Self Advocacy Network (ASAN) in 2012 to create an Autism Internship Program designed to match business needs with the unique capabilities of people with autism spectrum disorder. The program is geared to highly qualified individuals who have had a hard time finding or keeping work due to problems with social communication. Through the program, the company works with each individual to match abilities to jobs and help build “soft” skills. The program began with four interns and has since had 17 additional interns complete the program, nine of which were hired for full-time positions.  Watch a video about Freddie Mac’s neurodiversity hiring initiative.

JPMorgan Chase’s Autism at Work program has focused on hiring employees with autism since 2015. The initial program began as a four-person pilot and has since grown significantly to represent at least ten lines of business in multiple countries. Roles for program employees are varied, including software engineering, app development, tech operations, business analysis and personal banking. The company’s goal is to reach 300 program participants by 2020, focusing on 14 locations globally.

JPMorgan Chase works collaboratively with experienced disability-focused organizations to ensure quality experiences for their neurodiverse employees, including modifying the traditional interview process. Senior leadership buy-in across the firm also allows for identification of positions that would benefit from neurodiverse employees’ skills and talents. It also allows them to provide the most inclusive work environment possible in order to ensure employee success. Managers are also trained on communication issues that may arise, and program leaders are also developing a buddy system of mentors for employees with autism.

A partnership between KeyBank and The Precisionists, Inc., a company that provides job training and placement services for people with disabilities nationwide, is placing people with developmental disabilities in essential roles at several KeyBank locations in Cleveland. The jobs include positions related to anti-money-laundering efforts, fraud detection, data entry and analysis, and mailroom services. As of February 2020, eight people with autism or other developmental disabilities have been contracted to work with KeyBank through The Precisionists, with plans for more placements in the future. KeyBank has found that employees with autism excel at detail-oriented and repetitive tasks, performing as well as or outperforming their peers without disabilities.

Thanks to this partnership, The Precisionists is also growing its operation. Headquartered in Delaware, the company has satellite offices in Philadelphia, Nashville, and Phoenix. Due to the increase in demand for talent as a result of the KeyBank partnership, the company is considering opening another office in the Cleveland area to continue filling positions in the Midwest with dedicated, skilled workers.

Microsoft’s Autism Hiring Program began in 2015 and was designed “to attract talent and build an inclusive approach to support individuals on the autism spectrum….” Since its inception, employees hired through the program have worked across various teams within the company, including software engineering, data science and content writing. All positions are based in Microsoft’s Redmond, WA headquarters. The process for acceptance into the Autism Hiring Program includes attending an Autism Hiring Event, where eligible candidates are given an initial technical skills assessment; perhaps a phone screening; and then an invitation-only, week-long campus event to determine if a candidate’s skills and workability match with the company’s needs. New hires have on-boarding support, including job coaches and Microsoft mentors.

Microsoft has expressed that the larger goals of the Autism Hiring Program are to increase the percentage of employees with disabilities at Microsoft and to change the high unemployment and underemployment rates for people with autism. In order to do so, they also work closely with other companies who have inclusive hiring autism-focused initiatives and are a part of the Autism @ Work Employer Roundtable, hosted by Disability:IN.  See the Autism @ Work Employer Roundtable webpage for more information.

Each year since the inception of Microsoft’s Autism Hiring Program, they have hosted the Autism at Work Summit, alongside the members of the Autism @ Work Employer Roundtable. The event brings together companies with existing neurodiversity hiring initiatives and other companies that want to learn more about hiring people with autism, along with experts in the fields of neurodiversity and employment. Microsoft also hosts the Autism at Work Virtual Career Fair concurrently with the Summit, which provides opportunities for neurodiverse job candidates to connect with recruiters in an inclusive environment. Past Career Fair participants have included Bloomberg, Deloitte, EY, Ford, JP Morgan Chase, IBM and more.

SAP, a multinational software corporation, hosts an internationally recognized Autism at Work program that operates in 12 countries and employs approximately 150 people with autism. Launched in 2013, the program leverages the unique abilities and perspectives of people with autism to foster innovation within the company. Roles occupied within the program include human resources, marketing, finance, software development and customer support, and include a range of job duties, from task-oriented activities that support business operations to more complex, creative areas such as software development. Each April, in honor of Autism Awareness Month, SAP hosts events across the globe to promote the Autism at Work Program and dispel myths associated with autism. The company’s goal is to expand the program to have 1 percent of its total workforce – approximately 650 people – identify as people with autism by 2020.

Founded by two Massachusetts Institute of Technology (MIT) graduates, Ultranauts (formerly Ultra Testing) is a software engineering firm with two main goals: to prove that neurodiversity is a competitive advantage in the workplace and to provide superior service to its clients. As of 2019, Ultranauts has met both of those goals, with 75 percent of its employees being on the autism spectrum and a sustained average growth rate of 50 percent per year. Ultranauts maintains this success by using non-traditional hiring methods that provide neurodiverse job candidates with the opportunity to excel, such as having applicants complete a basic competency assessment that evaluates desirable attributes for software testers, rather than conducting traditional interviews. The company also works with employees to develop innovative strategies for improving workplace accessibility, like adjusting open-plan workplaces to take into account the needs of people who have noise sensitivities

Willis Towers Watson, a global advisory and brokerage company, began their autism hiring initiative in 2014 with a pilot program in the company’s White Plains, NY office. Through a partnership with Specialisterne, a nonprofit foundation that connects people with autism with employers, and AHRC, an organization supporting people with intellectual and other developmental disabilities, the pilot program employed 18 seasonal data analysts. The program was then expanded to officers in Connecticut, New Jersey and Philadelphia. Due to the success of the pilot programs, the company also expanded the program to the UK in 2016.